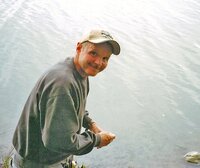 McFadden: Mark William, a resident of Chatham and formerly of R.R.#7 Dresden, passed away peacefully at the Chatham-Kent Hospice with his family by his side on Wednesday, November 30, 2022 at the age of 64. Born in Chatham, raised in Dresden, son of Marilyn McFadden (Webster) and the Late Bill McFadden. Beloved husband and best friend of Jill McFadden (Primeau). Survived by children Tinielle Johnston (Ryan Maillet) and Trevor Marchand. Sadly missed by his grandchildren Cohen, Chloe, Latasha, Michaela, Kyler, and Connor. Dear brother and brother-in-law of Sharon and Dennis Jackson, Brent and Cindy McFadden, Brian and Laura Jones, Peggy and Lloyd Cottel, Paul and Kim Jones, Sue and Dave Scott, the late Nancy Duncan and Dave, Joe Primeau and Sue, James Allison. Also survived by many nieces, nephews, and friends. The McFadden Family will receive friends at the Badder Funeral Home & Reception Centre, 679 North St., Dresden on Monday from  5:00 PM - 8:00 PM. The Funeral Service will be held in the chapel of the funeral home on Tuesday, December 6, 2022 at 11:00 AM. Interment Dresden Cemetery. In lieu of flowers, donations to the Chatham-Kent Hospice Foundation would be greatly appreciated. Online condolences and donations may be left at www.badderfuneralhome.com. We would like to give a heartfelt thank you to the staff, nurses, doctors and volunteers at the Chatham-Kent Hospice for the amazing care that Mark received while in their care.