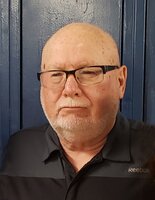 Richard James Murray of Dresden, Ontario passed away suddenly on Friday, October 28, 2022, at the age of 71.

Everyone that knew Richard felt his big heart and giving nature. Over the years Richard spent countable hours on the baseball diamond including playing, coaching, and supporting teams throughout the community. As favourite hobbies you would often find Richard working in his many gardens, researching ancestry, and supporting Jenny's love for creating repurposed art.

After a fulfilling day of work Richard enjoyed spending time with his dog and several cats.

Family and friends will be received at the Badder Funeral Home & Reception Centre, 679 North St. on Friday, November 4, 2022 from 1 p.m. until the time of the memorial service at 3 p.m. Cremation has taken place. The family has requested in lieu of flowers and cards that donations be made to P.A.W. Pet and Wildlife Rescue, pawr.org